My world is upside down right now. So this morning I chose to put on a T-shirt that would remind me of my happy place. It also has ties to how I became a coyote.

About 3 hours south of me is a gorgeous casino resort called Casino Rama. It’s been the site of many, many groupie adventures over the years, from the Beach Boys with my dad in 1998 when it had an outdoor amphitheater and you didn’t have to be of age to go in, to my first Glenn Frey show and subsequent groupie mission (or “stalkerazzi” mission as my roommate called it), plus several more Glenn adventures, to accidentally stepping on Lindsey Buckingham’s foot, and many more.

And a year ago last Monday my best friend, hereby dubbed Sister Coyote, and I went there to see Don Henley. I was fresh off my meet and greet experience in Dallas and had learned he was apparently a lot like us.

A creative insomniac who loves the outdoors, and whose opinions occasionally have opinions.

I drove all the way down to get the best seats months ahead, only to find out you actually can just call it in. Good thing I live far away though actually, because I always need a hotel room for the night. They have an awesome package that includes a room, a resort credit we used for breakfast in the morning, and 2 premium tickets. In our case, those tickets wound up being second row stage left.

The hotel is huge, and gorgeous.

Shortly after I bought the tickets, by the way, a contest was announced. If you donated to Don’s charity, the Walden Woods Project, you could win travel and 2 tickets to a show of your choice…and the opportunity to meet him.

Sure, I had my chance, but Sister Coyote hadn’t. Entering was a no brainer.

I donated $50 to get the entry and a t-shirt, because why not. I’m a pretty lucky person, but it was a hell of a long shot and my luck usually extends to casino wins, not contests. Still, I was optimistic, and I had to try. Us 3 insomniacs would’ve gotten along swimmingly.

Fast forward to July, when the tour was about to start and the contest was about to be drawn. I was working late one evening and had my phone in my desk. I was talking to my clients, with a coworker in my office helping me, when my phone rang.

“Sorry,” I said, “My phone contract is expired and they keep calling me to renew it…that’s not important…!” I make outbound calls as part of my job too, so we had a good laugh over ignoring those pesky sales calls.

This was true, the phone company was calling me a ton at that time.

Unfortunately, after work, I looked at my phone to discover a missed call from a California phone number. I know nobody in California, but the company running the contest was based there. Shaking, I called the number back, but it was an automated number that didn’t accept incoming calls.

The winner had been announced shortly after my missed call.

So I won…but I didn’t win. Gahhh so frustrating! The worst part is the colleague who was in with me, was also a fan. So I could have totally skipped out of the office for a second, made Sister Coyote’s year, and then finished what I was working on. If I had only remembered that this once, just this once, it was actually really freaking important to check my phone! 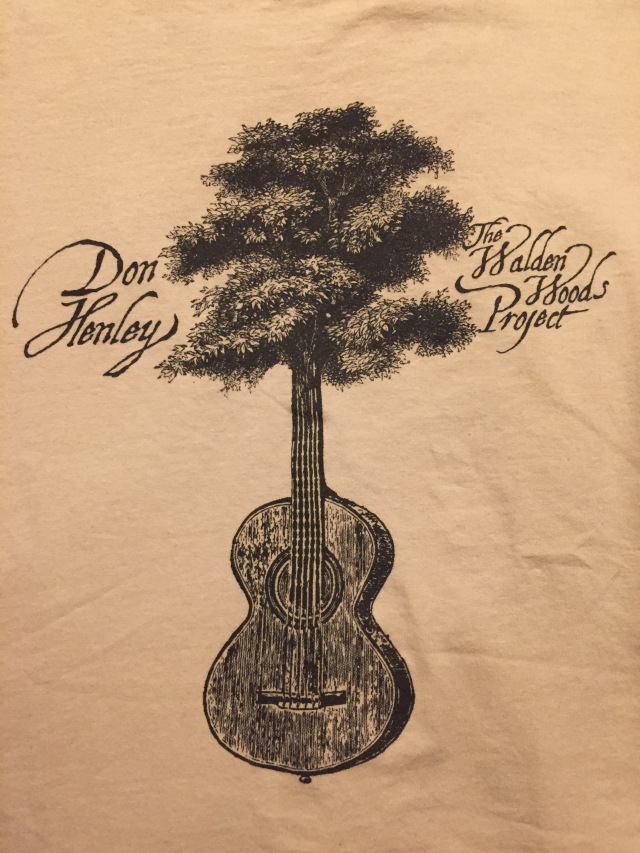 Still love the T-shirt and its lucky-unlucky origins, though.

We drove up pretty early on show day, wanting to get settled and second row pretty with time to spare. There was a long security line, but we still got in pretty early, and our seats were fantastic.

I have no pictures of this show unfortunately, because if any of you are familiar with Don and the Eagles you’ll know that cameras are strictly forbidden. I don’t mind this to be honest; I’m short, and I’ve spent a lot of time watching shows through other peoples’ phone screens. And Rama is strict about cameras themselves, so sneaking a shot or two was a total no-go. But I wish I had something to show how amazing our seats were. We were fairly far off to one side, but it’s not a large venue and there was very little space between front row and the stage.

The first thing I always try to assess, of course, is the sight lines. Can I see him, and most importantly, can he see me?? In this case the answer was yes to both, so we were perfectly situated.

I live for the spaces between songs. Like when a song ends and the artist is still at the mic, getting situated, probably gearing up to tell a story. Everyone’s cheering and then they start to taper off, the artist is looking at the crowd, front and centre, and it gets real quiet for that little half-step.

I can’t holler out words at a show, they just come out shrill and weird. So I cheer. Loudly. Just a little longer than everyone else. I’ve been doing that forever; it generally never gets noticed by the artists but I’ve gotten a few smiles here and there.

And then this show comes along.

Only a couple songs in, there was one of those golden moments I love. So I chose my moment, and as everyone else was quieting down I let out my usual “wooooo-hoo-hoo!”.

It echoed through the theatre.

Don burst out laughing and looked around for the source of the shriek.

He looked directly at me, grinning and laughing his adorable shoulder-shaking laugh.

What else could I do? I gave him a huge grin, waved with both hands, and then shrugged sheepishly.

“There’s coyotes in here!” He said to the audience.

The audience laughed, I doubled over onto the chair beside me, glancing back at Sister Coyote to revel in the moment. Don looked back at me again, and every time he did, he started laughing all over again.

It was freaking amazing.

After he regained his train of thought, he went on with the show. I tried to contain my coyote howl a bit after that, not because I was embarrassed because I totally wasn’t, but because it had done its job. We discovered that Sister Coyote and I have almost identical howls, hence her name, by the way.

The Kooky is a tale for another time.

After the show, most of the restaurants were inexplicably closed, with the exception of the one inside on the gaming floor itself. We wound up in there, as evidently the band (sans Don) did too.

They were right behind Sister Coyote for awhile, laughing hysterically at the size of an overgrown hot dog. Seriously, I think it was like a yard long. It was hilarious and one of those totally normal moments that remind you we’re really all the same.

We thought the giant wiener was funny too.

We stayed up most of the night just wandering around. Sister Coyote won $100 on a slot machine, and I won $50. I also happened to bump into Don’s lovely backup singers and some of his band mates, who kindly stopped for a second and gave me a chance to thank one of his longest-tenured musicians for signing a get well card for a friend of mine many years ago. One of his backup singers even complimented my dress! (I freaking love that dress actually, it’s Betsey Johnson and it was a totally frivolous purchase, but it’s served me well at a few shows now.)

All in all it was a fantastic night. Incredible show, as always. We didn’t get to meet our fellow insomniac, but that’s okay. We’ve been partners in crime since high school, and we live far apart now, so it’s always awesome when we get a chance to have an adventure.

And ever since that night, I have worn my Coyote label with pride.