The long, long month of non-stop work stress (and work in general: I’ve been working 6 days a week to meet my goals) has finally given way to my long awaited week of holidays, beginning yesterday with my 35th birthday!

For which I got…a wicked cold. Sigh.

Hopefully that will subside soon, because we had a few things we’ve been looking forward to doing and I definitely don’t want to miss out. However, last year, I had a much more eventful birthday. I finally got to knock something off my groupie bucket list.

A show actually on my birthday!

Mr Coyote and I were on our honeymoon this time last year, and had planned to see Don Henley in Montreal on September 14th. We had front row centre seats, incredibly, and being so close to my birthday I was super excited. Unfortunately, before we got to Montreal, we went to Ottawa and spent some time by the Rideau Canal, which had been afflicted with blue green algae.

Blue green algae is an annoying thing that blooms every summer in our lakes here in my town. When it’s present, you shouldn’t swim or otherwise be in or on the water, as it can easily sicken you if you happen to ingest any of it. I don’t think the Rideau Canal has an issue with it normally, but last year was unusually hot and dry.

We certainly didn’t go in the canal, but we stood by to watch two ladies in a tiny canoe go down through the series of locks, out into the much larger Ottawa River. This was fascinating, but unfortunately, I felt a few droplets of water splash up onto my face and lips. A few drops should be fine, I thought. I’m sensitive to stuff like that, but no way I’m that sensitive.

The night before the Don Henley show, my stomach took a turn for the worse. It wasn’t any better on show day, and I started to wonder if I was finally going to face the day I actually was too sick to see a show.

My groupie spirit won out however, and I managed to pull it together and get to our amazing seats and watch Don put on his typically incredible show. I’m not sure if he remembered me as the Coyote of Rama, but he was giving me one heck of an interesting look in the shadows before Witchy Woman!

I spent the first half of the show, though, extremely nauseous and concerned I wouldn’t make it. It was distracting, and I try to savour my shows.

I had noticed a show on my birthday, in New Hampshire, long after we’d already booked the Montreal one. I’d mentioned it to Mr Coyote, but he vetoed the extra expense and travel. But after not being able to immerse myself in Montreal, I decided to check out that New Hampshire birthday show again, and I made my case.

Second row seats were available for a very reasonable price, hotels nearby were inexpensive, and before that trip I had been to 24 states. I’d finally pass the halfway mark if we travelled through Vermont to get there! Plus, and mainly, I’d finally get to see a show on my birthday.

The morning of Friday, September 16th, Mr Coyote gave in. It was a 7.5 hour drive from Ottawa where we were staying. We had to make the decision fast and get on the road by 11am to even have a hope of making the 8pm start time, leaving time for the border and bathroom and food breaks.

This trip was totally unresearched.  As we drove through southern Quebec and into Vermont, the hills became mountains that only got taller. Nothing steep enough to test my trusty Mazda 3 yet, though, and I reasoned that it would only be a short portion of the trip because New Hampshire doesn’t have mountains. 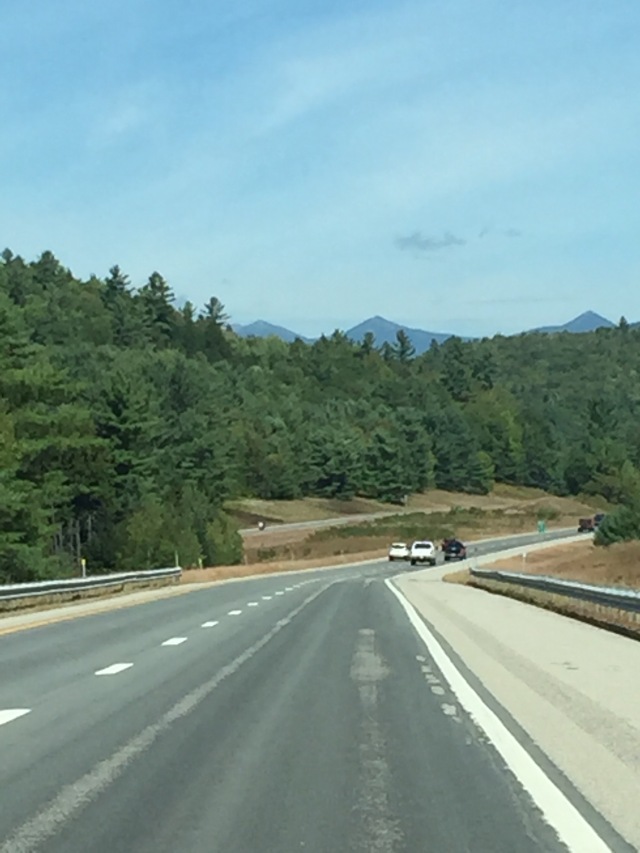 My goodness do they ever.

I lived in Roanoke, Virginia many years ago. I’m familiar with the rolling hills of the Blue Ridge Mountains.

But when I saw those big pointy mountains scraping the sky in the distance, so tall they were bare and rocky at the top, I got just a tad concerned.

When we got home I looked up what on earth we drove through. It was the White Mountain range, which includes the tallest peak on the eastern seaboard.

As the highway twisted and turned, I asked Mr Coyote, “I’m not gonna have to drive UP that, am I???”

Thankfully, the highway simply wound between them giving us spectacular views.

These pictures were taken by Mr Coyote. I was busy driving like a madwoman along this unfamiliar mountain highway, racing against the clock. My anxiety was higher than ever last year, and it often got the better of me. I overthought everything. However, if I’m on a groupie mission, nothing else matters. And that was the case here. I was so single minded, so focused on getting to my beloved birthday show, that everything else faded away.

Including the fact that it was my birthday.

We made two stops, one for gas and to get changed into concert clothes (another thing I love: the quick-change in the gas station or bus depot from sloppy travel clothes to groupie glam), and one for food. We arrived at the venue, a beautiful amphitheatre nestled in the unanticipated mountains of New Hampshire, right on time at 7:30.

We ate quickly and started walking fast towards the entrance, which was quite a ways away. At 7:38pm, my phone rang.

“Why is my mom calling me?” I questioned as we half-ran along. “Man…okay well I’ll just answer and tell her I’ll call her back tomorrow.”

I explained where we were (and my parents weren’t surprised; they’re used to my Coyote lifestyle by now), and let them know I’d call back when we returned to Canada. We went through security, grabbed a bottle of water and raced to our seats.

I checked in on Facebook at 7:59, trying to get a picture from our second row seats to add to it. At 8:00 on the dot, the lights went down and cameras became verboten.

The show was phenomenal. Although I completely respect and actually appreciate Don’s anti-camera stance, I wish so much I could have had a recording of just one moment. It got chilly, and Don went off to get a jacket. He returned wearing a red and black plaid coat that was…not really what I had expected of him. It gave him very much a down to earth, everyman type look, and the crowd must have felt the same way as me. Everyone giggled a little, then started to cheer.

He burst out laughing at this, and started to dance a little jig while singing The Lumberjack Song. “Oh I’m a lumberjack and I’m okay…”

I think that got the biggest cheer of the night. It was hilarious and just made me so…happy to see the famously private Eagle let loose a little on stage and just be himself. It was one of my favourite show moments ever.

And that’s why I go to multiple shows on a tour. Sure, the setlist stays the same. But every once in awhile, you get a Lumberjack Song.

I got one more smile out of Don late in the show, and headed back out to the parking lot on cloud 9.

“Maybe they’ll be going our way on the highway,” I mused. “Would be pretty cool to be following their buses!”

The parking lot was quite large, and we were taking our time. As we rounded he corner towards my car, I heard a familiar yet out of place noise.

“Where’s the airplane?” I called out to Mr Coyote, who laughed. We were in the middle of nowhere. There was no plane.

And then there was.

In a split second, a small private jet shot across the end of the parking lot off in the distance. It took off, rising above the trees in front of me, looking like a little silver space shuttle.

I could do nothing but stop in my tracks and stare. 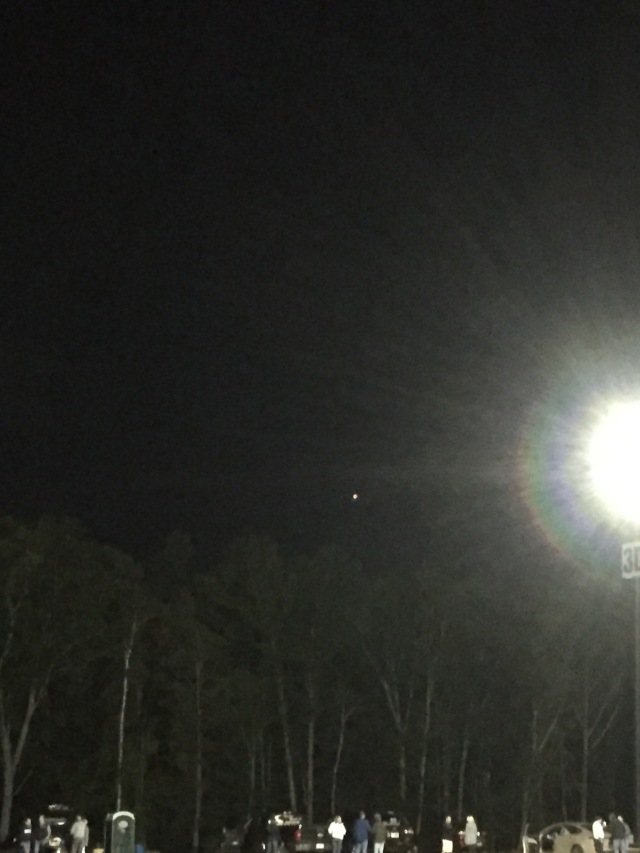 And take a picture of a dot in the sky that looks nothing like a plane. Guess you had to be there.

Turns out, that venue is so remote it actually has an airstrip. I can only assume it was the band’s plane. If it wasn’t, it’s what I’m sticking with anyway. And it was just the coolest thing I’d ever seen.

When I could finally speak, all I could think of to say was “well I’m not following that!”

I don’t know why but it was just so neat. We saw the plane right close; I’ve never seen a plane like that.

And as I watched it disappear over the mountains, I finally started to reflect on the day’s events, and how very lucky I was.

I’d always wanted to see a show on my birthday, and I was absolutely not disappointed. It was one of the many bucket list moments I had last year, and as much as that picture of a dot in the sky over a port-a-potty looks like nothing, I adore it.

So I guess I can live with having had a cold and a day in bed for my birthday this year. Last year I got 2 new states, a lumberjack song and a Learjet, so I can’t complain.