A couple months after the dream sequence that was the Glenn Frey tour, Lindsey Buckingham announced his first solo tour since 1993. I had dreamed of seeing him solo live–and meeting him–since falling down the Fleetwood Mac and solo rabbit hole in 1998, so this was a non-negotiable: I had to go.

There were several shows in late October that were close enough together to make a road trip out of, and thanks my ragweed allergy (literally–I used it to test nasal sprays for money), a payroll accident in my favour, and some wonderful friends who were making the drive, I was able to plan to see 3 shows in 4 days.

It turned into 5 in 5, and I came back different. I can’t think of any other way than to tell each story in succession, so welcome to my week of Lindsey!

Like most of my early trips, Cincy started out with an overnight Greyhound ride. I nearly missed my connection in Buffalo–some guy brought photocopies of his ID to cross the border with–but the driver took pity on us, left him there, and got us to the bus terminal just in time for me to grab the last seat on the ‘hound bound for Ohio.

I arrived in Cincinnati very early in the morning, and my friends wouldn’t be there til much later in the day. So I grabbed some breakfast and a pumpkin spice latte (luxuries I couldn’t often afford at home–I almost always took better care of myself when on the road, because I saved up for weeks for these trips), and wandered all over town just to see it.

I wish I had photos from these days, but I don’t. I didn’t have a digital camera, and I couldn’t afford film nor processing for my battered 35mm. One day I’d love to go back to the places I’ve been, to take pictures of the scenes that live in my memory. It wouldn’t be exactly the same, of course, 12 or more years later; but it would be an interesting pilgrimage.

I was hoping to just bump into Lindsey on the street somewhere, but that didn’t happen. I thought I saw him though, a tall, thin, curly-haired older guy striding along a couple blocks ahead of me, and I freaked out so bad I dropped my phone. It rolled a few feet along the sidewalk, and the ringer never worked right again. Wasn’t him though. Just some dude that inadvertently gave a 24-year-old Canadian girl a heart attack.

My friends arrived in the afternoon, and we checked in to our hotel. N, the friend who gave me my Glenn Frey backstage pass, was once again our fearless driver, and she introduced me to her lovely friends T and K. We proceeded to cause fangirl chaos in our small room, as the 4 of us got ready to see our man.

Because Cincy was a bit of a last minute decision, I was sitting pretty far back in 15th row. So because Lindsey wouldn’t be able to see me, I decided to just wear the same thing I wore to the Nashville show a couple weeks prior: a black kimono top, white corset, and jeans. At some point in the chaos however, I decided against the corset, and set it aside somewhere in that room.

And that’s where its story ends. It’s the only thing I’ve ever lost on tour. RIP, cute little corset, RIP.

We were just about to leave for the show when N realized she had forgotten her copy of Lindsey’s new album, Under the Skin, in her car. The hotel was valet only, with no in and out privileges, so she couldn’t retrieve it. I handed her mine, because they were sitting down front–Lindsey occasionally signed things from the stage, so she had a decent shot at an autograph. We figured we’d either switch later, or if she couldn’t get it signed I’d just take mine back.

We walked over to the venue and I remember walking past a tour bus. I’d never seen one that close before, just chilling there on a side street outside the venue, and I remember thinking, wonder if he’s in there? God I wish I could meet him someday.

The show was, in typical Lindsey fashion, high energy and incredible. Someone in the audience requested Bwana, from the Law and Order album, and he actually obliged! I was too far back to see very well but I’m pretty sure he used a…comb? as a kazoo? during the bridge, and he’s never done the song again since. (This is why I do multiple shows, y’all! A Don Henley lumberjack dance here, a Lindsey Buckingham kazoo-driven rarity there…) The crowd was overall fantastic, up and dancing even in 15th row, and it was all over way, way too fast.

When my friends and I met up again outside after the show, we noticed a small crowd gathering along that side street, by that bus. At some shows, Lindsey was known to sign autographs and take photos outside the venue before getting back in his vehicle. We hadn’t planned on waiting there, but seeing the crowd we figured, why not?

Somehow, K and I got separated a bit from T and N in the fray. We were close to the building, while they were a few feet to the right, closer to the car. We waited and waited, probably longer than we planned on because the crowd got pretty deep and we couldn’t really leave. Just when I was thinking we were probably out of luck, the side door of the theatre popped open.

“He’s right behind me guys!” Brett called out, grinning.

The throngs pushed forward, and somehow K and I were now standing right at the front, by the barriers.

I can’t tell this story any better than I told it in a voice post to Livejournal (I’m old) about 20 minutes after it happened. So, video caption is new, but audio is circa October 21st, 2006, and I’m sobbing now, listening to it, feeling it all over again.

Oh man. So many feels.

The memories of this are both crystal clear and also just little flashes that feel like a fever dream.  Lindsey did come back to where K and I were and signed K’s CD, I think–possibly with my infamous Sharpie.  He also signed the CD for N, so I’m really glad I had mine with me to give her!  I remember accidentally calling him Linds, at some point.  I think he maybe signed someone’s guitar?

I also still have that sign.  I kept the whole notebook. 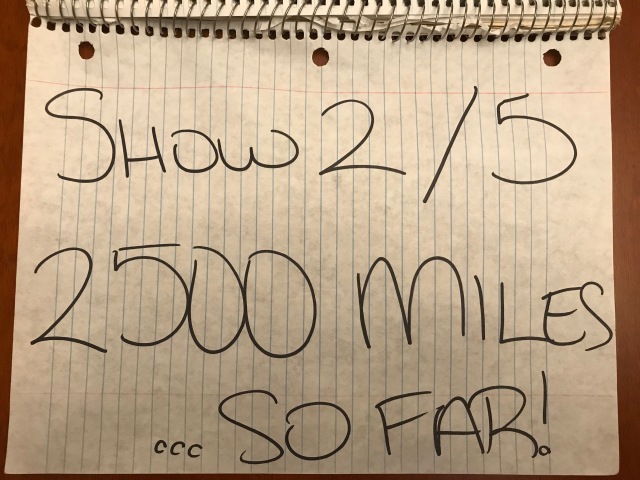 We walked over to a restaurant to end the night, and I ran back to the hotel to grab something from the room.  I called my friend to tell her what happened, and then called Livejournal to tell everyone.  And then I sobbed in the room.  I felt like if I jumped out our window, I knew I would fly.

But I wasn’t done.

Not by a long shot.

I had no idea what was coming, but this night would be topped very, very quickly.