Out of my brand new Supernatural fandom last year, I found a perfect term for a thing that I have carried with me through 7 moves (I counted), over 700 kilometres, for 16 years: a cursed object.

According to the Supernatural wiki, cursed objects are “objects imbued with black magic, that cause bad luck and misfortune, and in the most extreme case, can cause death.”

Mine’s certainly not as severe as that, but bad luck and misfortune? Definitely. Or at least I think so.

I don’t want to go into too much detail about how I wound up with this thing, but suffice to say, a plan went awry. Long story short, I wound up with a slightly-worse-for-wear copy of The Beach Boys and the California Myth, which I was only supposed to have in my possession for as long as it took me to mail it back out again to its intended owner. It ended up staying with me, and although I love the Beach Boys and this is considered the definitive biography of them (despite being out of print since 1985), the circumstances surrounding it at the time were so painful to me that I put it in a box and tried to forget about it.

It moved with me everywhere I went, because I didn’t know what to do with it. I didn’t want to sell it, because it wasn’t in great shape anyway (some pages were coming out when I obtained it, and the spine was broken and torn) and the last thing I wanted to do was profit from it. I also didn’t want to keep it, however, because it held nothing but sad memories, and I felt wrong about acknowledging that I was now its owner. It felt like it held bad karma for me, a memory of a time in my life I wish I could do over.

For years I hoped I’d make peace with it, but I never have. Early this year, for some reason, it popped into my head again. I don’t want to say my life hasn’t been good lately, but it’s been difficult, and I’ve been trying to find a way to change it.

Once you remove a cursed object, the curse is over. Its time had come. My bad karma needed to end. I was on a mission. What could I do with it? I can’t keep it, I finally admitted to myself; I’m never going to want to look through it, and it’s incredibly hard to find and would be valuable to someone. I could give it away, but to who?

My town has a record show that comes through every few months, and there’s a really nice vendor I always chat with. He both sells and buys, and I bet he would have a buyer for that thing somewhere along the line. But in its condition, I didn’t want to stick him with it, even for free.

I found this WikiHow page on how to fix a paperback book, and figured, what have I got to lose? I embarked on a little science project.

I ordered archival glue off Amazon (because $17 to move on with my life = more than worth it, and I finally had an excuse to order the Glenn Frey CD/DVD set I’ve had my eye on for ages to get to the free shipping threshold) and got to work.

Dollar store paintbrushes and loose pages gathered, it was time to begin. 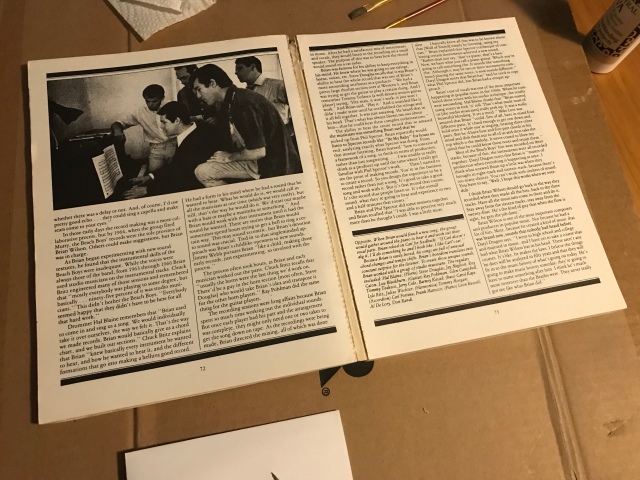 I have zero art skills, so I was a little worried about being able to even paint glue on a bit of remaining spine, but it went well. The loose pages were secured. All that remained was that huge break in the spine. 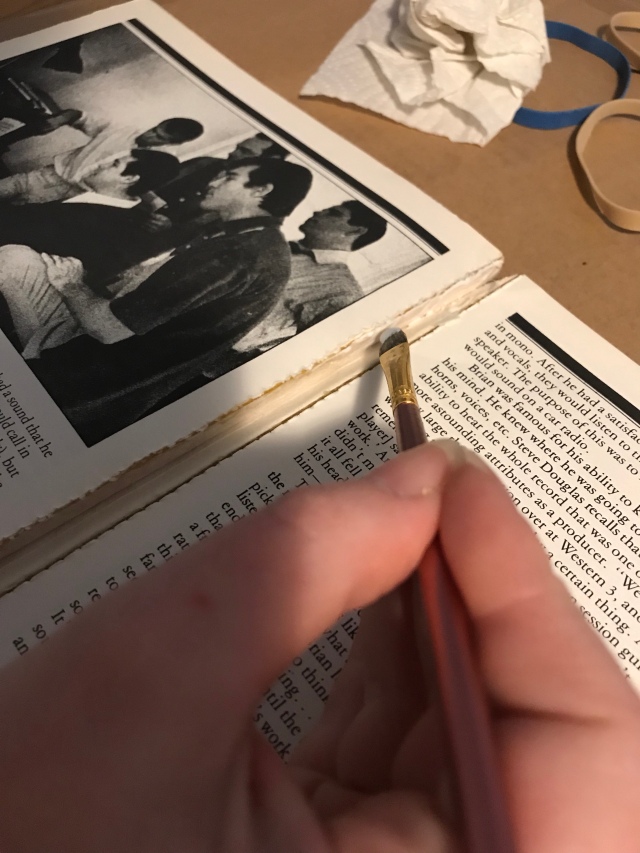 This part was surprisingly easy, although the glue dries really fast. 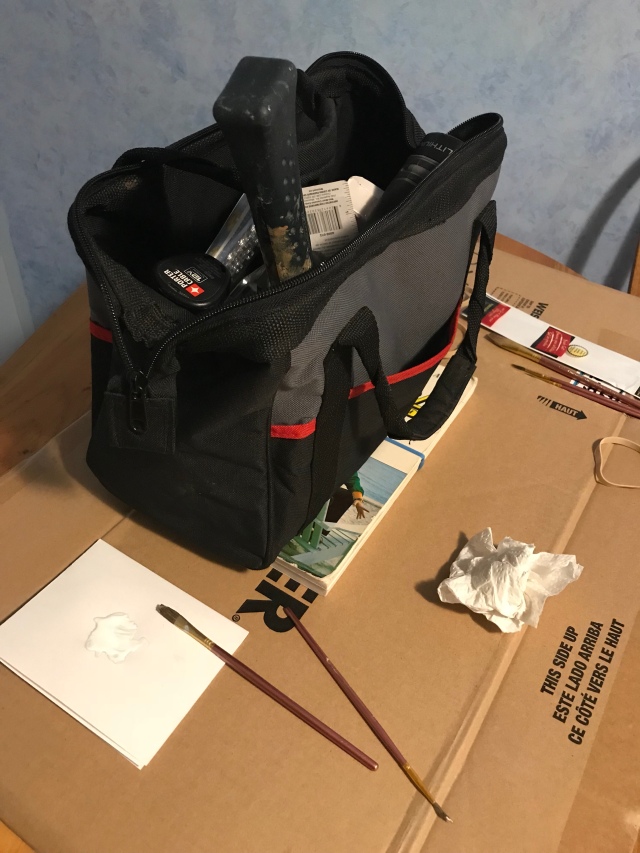 The drill bag was the heaviest big thing I could find, so on it went in order to ensure the elasticized book stayed flat and secure.

And this is what it looks like now, 2 days later!

THE BOOK LIVES AGAIN!!! This worked incredibly well; highly recommend this for any owners of broken books out there. I tugged lightly on the pages, and they do not budge. The book will always be fragile, so I haven’t put too much pressure on the spine, but you can’t tell at all that it was split.

The record show is tomorrow; if all goes according to plan, the book leaves me in less than 24 hours. It’s not cursed for anyone else; it would be an incredible find for a fan or collector of vintage books. I don’t even think I’ll sleep tonight, I’m so worried; what if that guy isn’t there tomorrow? What if he won’t take it?

I hope he is, and I hope he does. This lovely, rarer than rare, first edition book needs to be reentered into the fandom again. I’m giving it to him, free of charge (though he always has cool stuff, so if he wants to give me something I’m quite sure there will be a record or two I’d be willing to take off his hands). I just want to turn this bad memory into something nice for someone else.

In fairness, I doubt this poor unfortunate soul book is the root of all evil, but it would feel so nice to get this out of my possession. To not see it staring at me every time I use the storage bin it’s lived in since 2010.

Think happy thoughts for me–and for the book as it hopefully, finally makes its way to a better home. It will be a slightly triumphant moment for me: another step in the direction of finding peace.

One thought on “Memories, projects and cursed objects”