Record show day dawned cold and rainy and grey. This was my first day off since March 3rd, thanks to newly working 2 jobs, and I had no intention of getting out early. 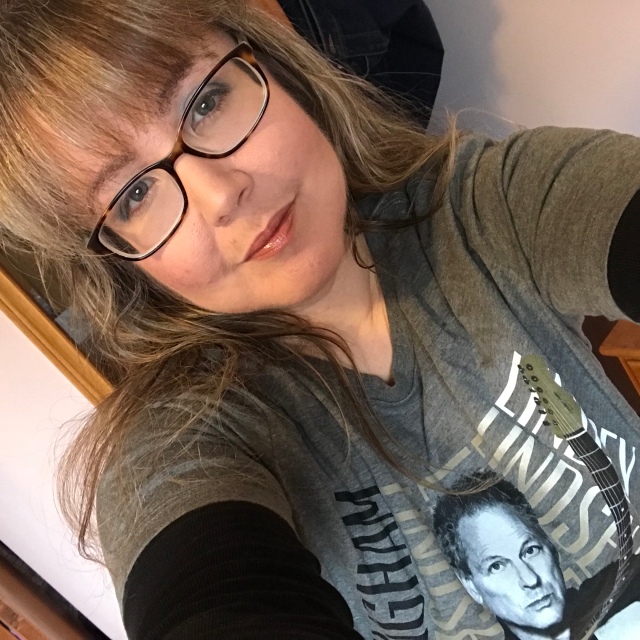 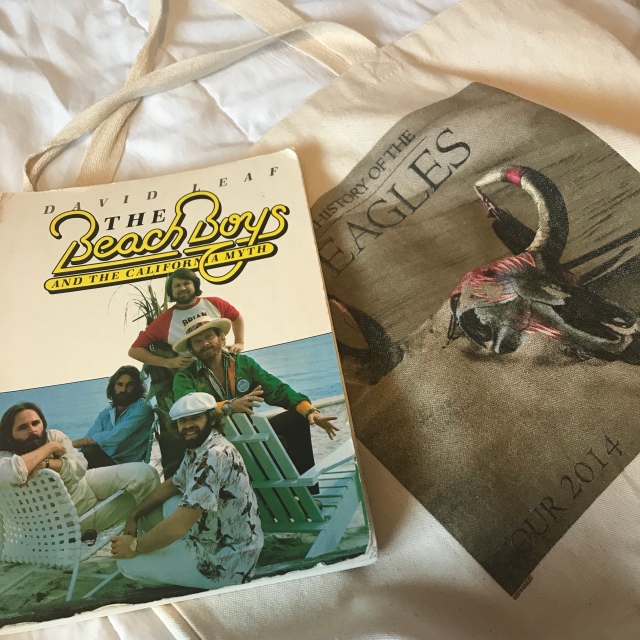 I decided to rep all 3 of my music fandoms, Lindsey for strength and my Eagles VIP merch bag from 2014, which carried home the t-shirt I won in a raffle, for luck. And of course, the cursed book, for freedom.

By the time I pulled it together enough to leave, picked up my mom, and we headed over, it was close to 2pm. My stomach was full of butterflies. If he’s not there, then what?, I kept asking myself, preparing for the worst.

I peered fearfully into the room as my mom finished filling out her ballot for the door prize. Looking to the right side of the room, I saw another vendor I recognized, standing in the same spot my guy usually occupies.

Then another man turned around. Success!

“Oh he is! He is!” I literally bounced a bit for joy and stampeded towards the door. “I wanna go there first, I just want to make sure I talk to him.”

As the vendor chatted with another attendee, we started looking through his display. I instantly spotted the Eagles Greatest Hits 1972-1975, which I have on CD but not vinyl, and grabbed that up. My mom started searching through his Beatles selection as he wrapped up his conversation. I made my way over.

“Hi, what can I help–oh, hi!” He recognized me almost right away. “I’m still looking for your frickin’ album, I don’t think I will ever find that.”

Up until last fall, I’d been desperately searching for Lindsey Buckingham’s Out of the Cradle. He had joined the hunt; I’d given him a budget and a seemingly impossible mission.

“You know what? I have it,” I declared triumphantly, “My husband bought it for me last year!”

After a couple more minutes chatting about Lindsey’s heart surgery and other things, I reached into my bag.

“I have something for you, and if you want it, it’s yours for free.”

I explained it’s dubious origins (while making sure to say I came by it honestly, and he wasn’t inheriting some sort of stolen thing), and that I wanted nothing for it because it had become kind of an anchor for me, dragging it behind me for so many years.

“Cool,” he said, looking it over, flipping through the pages to inspect it (oh, I was so proud–it held together perfectly!). “I will definitely take this, I’m sure someone will want it. Thank you!”

And just like that, the book left my possession and entered his employ, joining his display of other memorabilia.

Goodbye, The Beach Boys and the California Myth; you are a beautiful book and I hope you find a lovely home!

It was triumphant and bittersweet. It’s surprisingly different without it around, though it lived in storage forever. I guess I was more aware of its presence than I thought. The longer I think about it, the more free I feel. I finally did right by that thing; I finally let go of a big part of that time in my life.

I bought the Eagles record, as well as a little commemorative “backstage pass” from the Eagles’ Farewell One tour simply because I went to that tour and it’s cool, and we turned to the next vendor.

As soon as we walked over to the next table, the man behind it stood up and said “Has anyone ever told you you look just like Stevie Nicks?”

I laughed, opening my jacket to reveal my Lindsey shirt. “Yes, actually, I’m mad at her right now, but that is still a compliment, so thank you!”

He agreed with me that what she did to Lindsey and to Fleetwood Mac itself is ridiculous, and again, we discussed Lindsey’s surgery, wishing him well in his recovery.

My mom and I both found some 45s we wanted, mine being 2 Fleetwood Mac ones from Tango in the Night that contain Lindsey B-side songs I’ve never heard before, and my mom found an LP as well. She asked if she could show him a few albums she brought for a possible trade, and as she reached into her bag to pull them out, I set my items down on the table.

I had looked at his selection of books, but apparently not carefully. Because I hadn’t seen this. 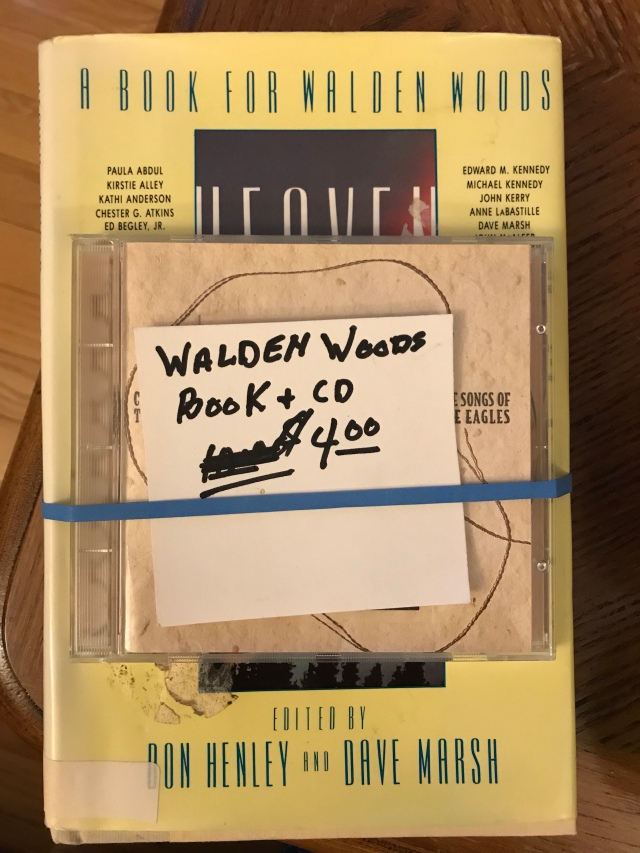 This is Heaven is Under our Feet, the book that Don Henley and the Walden Woods Project assembled in 1991 when the Project was started. The CD is Common Thread: The Songs of the Eagles, which is often credited as bringing the Eagles back together by way of Travis Tritt’s video for his cover of “Take It Easy”.

“Oh my God!” I exclaimed, grabbing the book like it was a pot of gold. “I’ve wanted this book for so long!!!”

Needless to say, I own it now and I could not be happier!

I started thinking, as we walked on to the next display, about just how long I’ve wanted that book.

My Eagles and Don Henley fandom began in the States in 2000. I remember talking with my friend C about wanting to go to Walden Woods one day, and wanting this book. I’ve looked at it on the Walden Woods Project website so many times, telling myself to just order it, but although the book is reasonably priced, the cost of shipping alone drives it up higher than I can do, every time. I had resigned myself to thinking that perhaps if I ever do make my way there, I’d be able to buy it there as a souvenir.

Yet there it laid. In a very strange but direct way, it seemed, the universe was giving me the A-OK. A book for a book; a bad memory for a good one; a cursed object for a treasure.

I keep staring at it, I can’t believe I own it. I’ve wanted it so long. And the photo of Don in it is one of the nicest I’ve seen of him, which makes me infinitely happy because, fangirl. 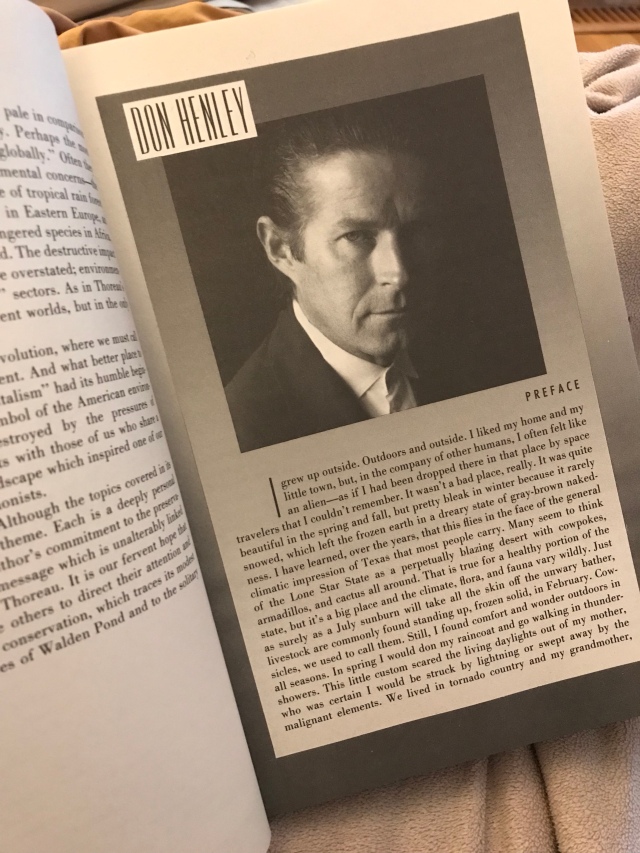 All in all, what a great haul today! 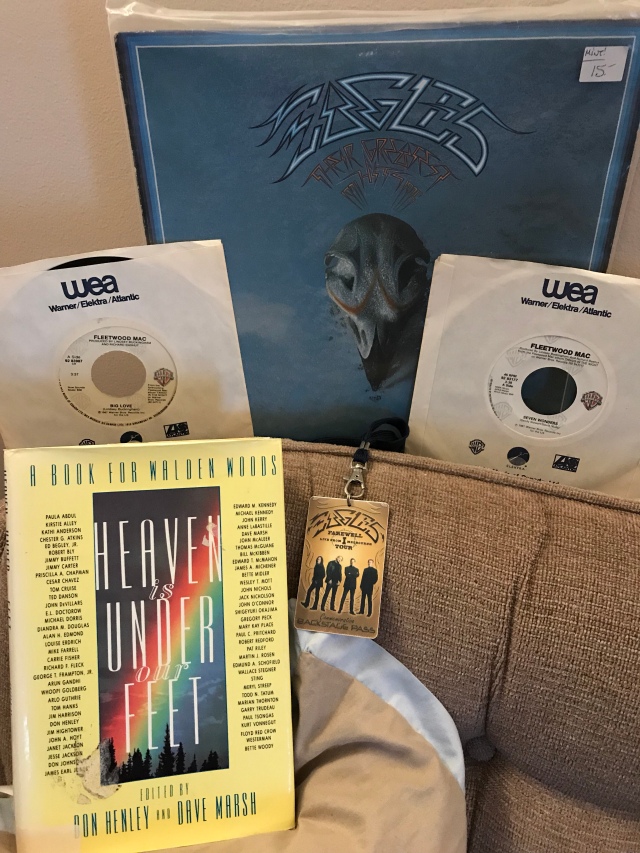 (Don’t mind the missing CD; I was too distracted by the book and completely forgot to display the CD here, lol.)

It was a fun day with my mom, and a freeing day for me. I hope I did the right thing. I silently wished the book well on its journey, apologized to it and to its former owners for its circumstances, and I think it will be a great find for someone else.

I’d like to think that, at this travelling record show’s next stop, some random Beach Boys fan will grab it up like gold, and have the “I found my holy grail” feeling that I do right now with the entrance of the Walden Woods book into my life.

“So often times it happens

That we live our lives in chains

And we never even know we have the key…”

One thought on “So often times it happens, that we live our lives in chains…”